Want to attract a specif person?
Find out how to attract a person you like!
Advertisement
Home » Health & Wellness » Tai Chi Healing 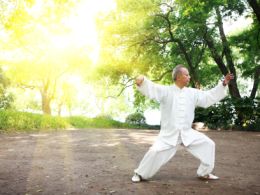 Tai Chi is a spiritual healing exercise that you can learn together with an instructor and then do regularly on your own. Tai Chi is a more mobile form of Qigong. Tai Chi exercises can help you create a sense of calm and balance in your body and spirit.

Tai Chi exercises are gentle and suitable for elderly people. Tai Chi healing consists of a series of positions which are carried out after each other in a slow sequence of dance-like movements. One can do a few movements, or a long series of movements.

Tai Chi is a more mobile form of Qigong. The movements in Tai Chi are often described as “swimming in air” and forms the habit of living fully in the moment and “going with the flow”. Tai Chi is sometimes called the method of “shadow boxing”. The goal of Tai Chi exercises is to provide a steady flow of life energy Qi, because the occurrence of various diseases is – according to traditional Chinese medicine – due to an imbalance of Qi. Tai Chi exercises calm the body and spirit and are great for spiritual healing.

Tai Chi can be translated as “maximum force”. Some believe that the healing techniques are derived from a Taoist monk who – in the 13th century – dreamed of a snake and a crane that did dance-like movements during a fight. This Taoist monk combined the movements with traditional Taoist breathing exercises, and created Tai Chi. Others speculate that Tai Chi is a martial art developed by several monks, while there are people believing that the method was developed 400 years ago by a Chinese general.

Today, Tai Chi is very popular both in China and in the Western World. Tai Chi exercises are perfect for overall spiritual healing and will increase your life energy. If you want to learn more, see Tai Chi Healing – The Basics.