Want to attract a specif person?
Find out how to attract a person you like!
Advertisement
Home » Healing Tools A-Z » Reflexology 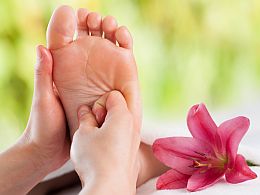 Reflexology, also known as zone therapy, is a medicinal procedure in which pressure is exerted toward a patient’s feet, hands, and ears. It works with the body’s vital energy through the stimulation of certain points, and is similar to acupressure and acupuncture in that way. It is considered its own field and not a subsidiary of other similar procedures such as massage. The rationale behind the procedure is that there are zones in the feet, hands, and ears that (when applying pressure to them) produce changes in the body. The guiding principle of reflexology is that the reflexologist is only a participant in the healing session, rather than “the healer”. The body repairs itself, and it responds to touch which allows healing on all levels.

Reflexology has existed as far back as Ancient Egypt. Other cultures that have been linked with reflexology include Japan and China. Despite its rich history, it was not adopted in the United States until early in the 20th century.

Even though reflexology has not been proven to have any valid basis in science, reflexology is increasingly gaining popularity across Europe and Asia as an alternative therapy. In Denmark it is one of the most used alternative therapy, where 21.4% of the population have used this therapy form at some point in life, according to a national survey from 2005.

How does Reflexology work?

Reflexology works through treating the body as a complex series of zones, with the belief that pressure points on the feet, hands, and ears correspond with pressure points elsewhere on the body. Reflexology works with the central nervous system that adjusts to stimulus. Pressure on the reflexology points sends calming message to the central nervous system, which in turn signals the body to adjust the tension level. When this happens, the whole body relaxes. This brings the internal organs into a state of optimal functioning, and the blood supply increases. Also, the circulatory, respiratory, immune, endocrine, and neuropeptide systems in the body are affected positively in this process.

Video: How you can reduce stress with reflexology

The reflexologist applies the pressure using finger prescribed exercises. It is important that the therapist avoid using any sort of oils or lubricants, since one of the bases for the procedure is that the direct, unmediated contact helps free the patient’s muscles. Reflexology is similar to a massage in that while pressure is exerted on the targeted spots on the body, the treatment should never be painful. In a typical session, the patient lies down on a massage table and a typical session lasts for roughly 1 hour. Although this basic definition is universally agreed upon, a universal, specific methodology has not been agreed upon. However, the general belief is that the tips of the toes correspond with the head, the ball of the foot is linked with one’s heart, the foot arch relates to the liver, and the heel is matched with the back and the intestines. If you suffer from a condition, let’s say migraine, the reflexologist will carefully work on the migraine points on the toes, but the reflexologist will always work all areas of the foot, regardless of your health condition, because this allows the nerve pathways to promote relaxation for the whole body. The experience during the session is very individual. Some patients are able to actually feel how the energy moves throughout the body during the session, while others will experience a deep relaxation, or perhaps a desire to sleep.

If there are any reactions after a reflexology session, it is mostly a sign of healing, and normally lasts for 24-48. Symptoms may include tiredness (which is a sign that the body needs to rest and repair), skin rashes or frequent bowel movements (due to elimination of toxins), flu-like symptoms, increased mucus, and emotional release (crying). Positive reactions may include enhanced sleep, relief from pain, and more mobile joints.

What is Reflexology used for?

Reflexology is used for treating everything from muscle pain to stress-related maladies. It is often used for athletes rehabbing from injuries, although it is recommended that reflexology is conducted in conjunction with a supplementary, more scientific procedure. Those suffering from joint pain (e.g. arthritis), headaches and backaches have received benefit from reflexology, as have people with hormonal issues, menstrual disorders, or insomnia. Some people have also found reflexology helpful in connection with weight loss. It is also said that reflexology can assist in regulating blood flow. The procedure should be used cautiously for people who are pregnant or who suffer from more serious internal maladies such as foot ulcers or blood clots.

What are the benefits of Reflexology?

A vast array of benefits has been reported from reflexology, although the validity of such claims remains in doubt. Possible benefits of reflexology may include increased energy, stress reduction, pain relief, improved circulation, and improved immune system. Reflexology has also been associated with improving anemia, earaches, heart disease and difficulty hearing. Regardless of whether it has any scientific basis, reflexology is a capable procedure with which to loosen one’s muscles. Because it involves soothing the muscles, there is reason to believe that reflexology can assist in reducing stress, in much the same way as a massage.

Reflexology for BACK & NECK PAIN