Want to attract a specif person?
Find out how to attract a person you like!
Advertisement
Home » Healing Tools A-Z » Tai Chi 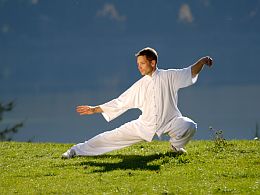 What is Tai Chi?

Tai chi is a form of Chinese martial arts that, in addition to being a great form of exercise, has additional therapeutic benefits. Although it originated as a form of self-defense, its enduring popularity is in large part due to its health benefits.

Tai chi is similar to the Chinese practice of Qigong in that both are said to utilize the Chinese concept of qi, or the life force that allows people to live with balance and harmony. In the early 20th century it was first adopted by other cultures and has since been popularized throughout the world.

How does Tai Chi work?

Tai chi is known for its stillness; the individual performs a serious of exercises which are predetermined and rigidly choreographed. Every movement is accounted for and the pace is generally quite slow. However, there are literally dozens of varieties of tai chi, and the different variations are mainly characterized by the pace in which the exercises are performed. Tai chi can be practiced either by oneself or in groups and with a partner. It is crucially important that one regulate their breathing and whether one performs tai chi by themselves or with someone, the exercises are characterized by a pushing motion. Individuals should possess a calm demeanor and there should not be any pain or stiffness in the movements—they are attempted to have a soothing effect and should not incorporate the harsh contortions that one finds in other forms of meditation, such as yoga. More physical forms of tai chi can result in physical pain, as they are predicated around pushing and slapping with the arms. This is often conducted with great force and can result in serious injury. Despite the potentially violent outcomes that may result from this form of tai chi, it is important to note that tai chi is a cooperative martial arts form, and by both members are expected to feel pain since brute force is met with equal force.

What are the benefits of Tai Chi?

As a form of martial arts, tai chi results in mental as well as physical benefits. It relaxes the mind and frees the body. Because the exercises are quite simple, it cleanses the mind since the individual focuses their concentration on a very basic task. Tai chi results in greater agility, more flexible bone structure, and improved concentration. Although people may not feel the aerobic ‘high’ that they get when running long distances, they should still receive a workout and it is a capable method through which to improve one’s fitness.

Who or what is Tai Chi used for?

Tai chi is used by people who seek either a form of meditation or a form of exercise. It is commonly prescribed to arthritics and anyone who suffers from muscle stiffness. People with dexterity issues may also benefit from tai chi as it can help people become aware of their physicality, and those who suffer from stress may find that it frees their minds as well as their bodies.