Want to attract a specif person?
Find out how to attract a person you like!
Advertisement
Home » Health & Wellness » Yoga Healing

Yoga is a spiritual healing process that creates a sense of calm by balancing body and mind. Your body and spirit work together and Yoga helps you become more aware of this connection. 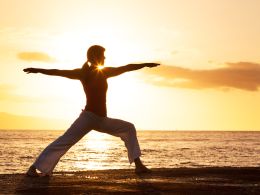 Yoga Healing for Body and Soul

Yoga originated in India over 5,000 years ago and was used in Hinduism. Yoga is a traditional physical and mental discipline. The word Yoga in Sanskrit means union or association. Yoga refers to a union between body and soul. Yoga is a philosophy of life which include physical exercise, breathing techniques, concentration exercises and meditation.

Yoga has been known in the West since the 19th century and its popularity has increased greatly in recent decades. Today, Yoga is included as part of treatment of certain cardiovascular diseases in the United States.

According to the philosophy of Yoga, our body can be compared to a vehicle driven by the mind through action, feeling and intelligence. Yoga aims to maintain a balance between action-feeling-intelligence to achieve an inner peace. This spiritual healing method is believed to increase body awareness and body flexibility and strength. Yoga is a gentle form of spiritual healing exercise for both body and soul, but is also a teaching of the art of living.

Yoga is said to reduce problems caused by stress. As you practice Yoga, your breathing will become more regular. Your body will become more relaxed and your mind calmer. You can learn Yoga exercises together with an instructor and then do them regularly on your own. Your Yoga instructor will teach you different positions and movements combined with breathing exercises.

Yoga uses the inherent life force which is called Prana. This can be compared to “Qi” that also means life force energy; the same energy that is used in Qigong healing exercises.

According to Yoga, the life force called Prana can be found everywhere and is the power in the universe. Everything that vibrates in the universe(light, heat, magnetism, life, spirit, etc.) is Prana.

Prana is considered to flow through the body into energy channels, called nadis. Chakras are knots in the nadis or places where nadis intersect. There are six chakras that are considered important. If the flow of energy is blocked in one of these six chakras there is a great possibility that you will have symptoms or become ill. Yoga exercises can help you dissolve energy blockages in the chakras.

Yoga is used in many different problems, such as stress, headaches, back problems and insomnia. Research has shown that Yoga has a positive effect on the heart and blood circulation. Swedish studies on people with stress disorders have also shown that Yoga can provide relaxation, reduced pain and anxiety.

Yoga is used against stress, headaches, depression, circulatory and bronchial problems, arthritis and menstrual discomfort. Yoga exercises are also used in chronic fatigue syndrome, back problems and sleep problems. Yoga is also considered to preserve harmony in the body; thus preventing you from developing various ailments. There are many different kinds of yoga with different levels of physical activity. Learn the basics of Yoga healing, and try different Yoga exercises. Choose a Yoga form that you feel most comfortable with.