Want to attract a specif person?
Find out how to attract a person you like!
Advertisement
Home » Health & Wellness » Solfeggio Frequencies – The Numbers 3, 6 and 9

Solfeggio Frequencies – The Numbers 3, 6 and 9 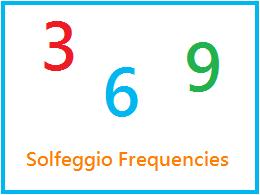 See what experts have to say about the numbers 3, 6 and 9 and the Solfeggio Frequencies.

Scientists have discovered that the vibrations of the numbers 3, 6, and 9 are extraordinarily powerful.

Solfeggio Frequencies – Based on the Numbers 3, 6, 9

To explain the powers behind the Solfeggio Frequencies, let’s see how the sound – depending on the frequency – vibrates!

First, it’s important to understand that sound is a vibration and each sound/vibration affects us differently. The easiest way to demonstrate this is to use Cymatics – a process of visualizing sound by vibrating a medium such as water or sand!

The word “cymatic” comes from the Greek word “kuma” that can be translated as a wave of energy. Cymatics is the study of visible sound and healing. An experiment that demonstrates the visualization of cymatics was done back in 1787 by Ernest Chladni. He placed some sand on a metal plate and drew a violin bow along the edge of the plate to create a vibration. The most amazing thing happened – the sand formed itself into wave patterns, such as concentric circles.

See for yourself! Watch the demonstation video on cymatics below:

The History of Cymatics

The history of cymatics goes even further back with Da Vinci (1452-1519) as he noticed that a vibrating wooden table with dust on it, created various shape. Galileo (1564-1642) noticed long row of fine dancing streaks as he scraped a brass plate. The English scientist of Oxford University, Robert Hooke (1635-1703) discovered that flour on a glass plate created patterns as he drew a violin bow along the edge of the glass plate. It was this experiment that inspired Ernest Chladni 100 years later, to use sand on metal plate instead.