Want to attract a specif person?
Find out how to attract a person you like!
Advertisement
Home » Healing Tools A-Z » Sound Healing

What is Sound healing?

Sound healing is a stress reduction procedure that utilizes sonic vibrations. The procedure is said to synchronize brain wave frequencies and in so doing, create inner peace and cure a number of diseases. Variations of sound healing exist in a number of cultures stemming back thousands of years, and versions of the technique have been attributed to early Christian culture and Hindu custom, for example. It has been appropriated as a New Age healing technique and is practiced widely among in the United States. Listen to Sound Healing – Solfeggio Frequencies – for Chakra healing and DNA healing, see below.

How does Sound healing work?

There are a number of common techniques that fall under the umbrella term “sound healing.” These generally relate to the type of instrument used, including bowls, bells, and forks; although a number of different instruments are used, the most common (and traditional) are ancient Tibetan bowls. Sound therapy is based on the belief that by altering one’s cognitive faculties, one can improve their spiritual, mental, and physical well-being. Although its adherents assert that it is influential in healing a wide array of maladies, it should be noted that sound healing is never believed to be able to heal in and of itself. Instead, sound healing is used in conjunction with other therapeutic processes with the belief that it creates the proper environment that enables the body to heal.

In a traditional sound healing session, Tibetan bowl are placed at the locations associated with the chakras on the patient’s body and are performed with according to predesigned sonic rhythms and vibrations. The sounds that emerge from the bowl are said to regulate one’s brain functions, treating the brain as an apparatus that is calibrated according to the rhythms elicited by the bowl. Sound healing practices stipulate that the sounds and vibrations slow down one’s mental processes, distancing the patient from the way they have perceived their environment. In addition to using sounds, some practices incorporate visual exercises. A typical session lasts roughly one hour and it is believed that multiple sessions are necessary before the desired results are obtained.

Advocates of sound healing believe that vibrations and frequencies effect human health and wellness. They use sound frequencies to rebalance the body’s energy. It appears that sound frequency healing has a relaxing effect and can be a great help for people who suffers from stress-related disorders, according to a study made by the British Academy of Sound Therapy (BAST). There are many sound healing CDs and MP3s available on the market today for self-healing purposes – and a lot of these sound healing tools are based on the wisdom of the ancient solfeggio frequencies.

Solfeggio Frequencies are based on a six note scale, and was used in ancient Gregorian Chants to give spiritual blessings when sung in harmony during religious masses. This ancient scale was rediscovered in 1974 by Dr. Joseph Puleo and Dr. Leonard Horowitz. They learned that Solfeggio frequencies could provide healing to our bodies, and that the frequency of 528 Hz could repair the DNA! Each of the six Solfeggio frequencies corresponds to a specific note, Hz, color and chakra in the body. The original Solfeggio scale was composed of only six notes, but a 7th note has been added to the modern scale. By listening to a specific note, you will heal the chakra that corresponds to that note. 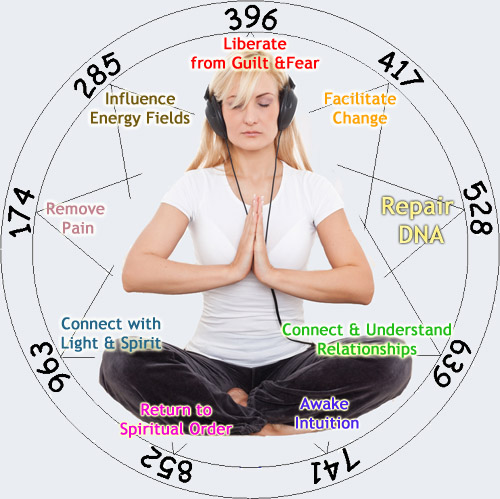 Relax and enjoy the healing effects of Solfeggio Frequencies.

In the late 1920s and early 1930s, a frequency generator was used on viruses and bacteria to learn how to eliminate them. Dr. Royal Raymond Rife documented his work, and due to his documentation we can now experiment using frequency application on many conditions with a so called “Rife machine”. Rife is a research instrument and is used to assist in making chemical changes in the body. It can help strengthen the immune system, and is also effective in treating many health conditions, according to Rife advocates.

What is Sound healing used for?

Sound healing has traditionally been used for individuals suffering from stress, although this is not a firm prerequisite. The procedure is also employed for people who are not suffering, but to increase their focus and relax themselves, similar to someone going to a spa or receiving a massage. The technique is often used as part of the healing process for chemotherapy or skin disorders. Because it helps people perceive the world in a new light, it is perhaps most commonly used with individuals who suffer from mood disorders, including depression, social anxiety disorder, or chronic stress.

What are the benefits of Sound healing?

Sound healing affects all cells in our bodies and works on all levels: emotional, physical and spiritual. The benefits of sound healing are manifold and refer to the maladies that it can be used to help cure. Many people have reported that they feel more relaxed, are less stressed, and sleep better after a few sound healing sessions. It is also believed that sound healing releases and removes blockages and toxins.

Sound healing does not require any medication and so there are no pharmacological side effects. One additional benefit is that the procedure can also be conducted at a distance, obviating the need for transportation.