The Secret Behind The Secret – Abraham-Hicks Version 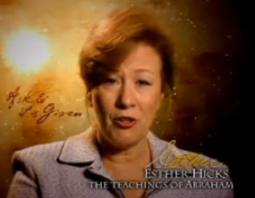 Also, watch Abraham-Hicks – The Secret Behind The Secret to learn why Esther Hicks wasn’t covered in the later edition of The Secret movie.

The Release of The Secret Film

The Secret was produced by Rhonda Byrne for Prime Time Productions. It is a self coaching film and uses a documentary format to present the Law of Attraction. The Secret includes interviews of professionals and authors that work with spiritual coaching. The initial vision was to release The Secret on television to the whole world in 24 hours. However, this didn’t happen. Instead, in March 23, 2006, the film was broadcast on the internet.

When was ”The Secret Esther Hicks Version” Released?

Video of The Secret with Esther Hicks

Watch Esther Hicks as she is channeling Abraham – the infinite intelligence. It was filmed for the first edition of the Secret film. Find the original material of Law of Attraction that is responsible for the great interest in this powerful law. Today, people around the world are more or less aware of the principles of the law of attraction.

Abraham-Hicks and The secret – Where it all started…

Abraham and “The Secret Behind The Secret” – Explanation

Many people found it very strange that Esther Hicks (Abraham) wasn’t covered in the second release of the film. So why did Esther Hicks only appear in the original edition of The Secret film? What’s the story behind the infinite intelligence? Why did they remove The Secret original version?

Watch the video below to learn about Esther Hicks and Jerry Hicks‘ involvement in the popular film The Secret that was released in 2006. Also, find out why Esther Hicks only appears in the original edition.

You can still get the original full movie of The Secret with Abraham Hicks. Esther Hicks appears in the first edition of the movie, but she was not included in the later editions. You can still purchase the original version. This documentary on the law of attraction and self growth is highly recommended!