Want to attract a specif person?
Find out how to attract a person you like!
Advertisement
Home » Healing Tools A-Z » Feldenkrais Method 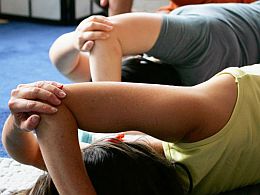 What is the Feldenkrais Method?

The Feldenkrais Method is an educational philosophy that is used to improve movement and self-awareness, as well as reduce pain. The technique was founded by the Russian physicist Moshe Feldenkrais and accordingly, and it borrows heavily from physics and biomechanics. The governing philosophy of the approach is the belief that if a person changes the way they move, this corresponds with a change in their self-perception. The Feldenkrais Method is similar to the Alexander Technique in that it is an instructive procedure that the patient learns to implement by themselves.

How does the Feldenkrais Method work?

The Feldenkrais Method can be learned either through group or private sessions, lasting between a half-hour to an hour. Group lessons are taught by a highly trained instructor, and the teaching certification requires 700-800 hours of training over a span of at least three years. The group lesson approach is known as Awareness Through Movement, while the private lessons are termed Functional Integration.

Awareness Through Movement sessions involve movement exercises. In the beginning, the exercises are undemanding, but they get progressively more difficult in terms of the range of movement involved. The exercises are not improvisational and it is imperative that they are highly monitored by the instructor; this is because the emphasis is not so much on which exercise the patient is doing so much as how they perform it. Exercises often simulate everyday movement such as reaching and walking. The patient learns to perform such universal movements in a more ergonomic and structurally sound way.

In the Functional Integration approach, a trained therapist uses their hands in order to instruct the patient as to the correct posture and movement in order to move with maximum efficiency. Through this ‘hands-on’ approach, the student learns how to discard all extraneous movement and control their body more fluidly. The specific exercises are often devised by the client although they are often largely universal.

What is the Feldenkrais Method used for?

The Method has been employed with those who suffer from joint or muscle pain, as well as people recovering from more serious afflictions such as stroke. It is also not uncommon for people without physical discomfort to learn the approach since learning how to move in a more graceful and efficient way has been shown to improve one’s self-perception.

What are the benefits of the Feldenkrais Method?

The benefits of the Feldenkrais Method are both physical and psychological. Anyone can learn it and it improves one’s perception of their own body, in addition to relieving joint and muscle pain.