Want to attract a specif person?
Find out how to attract a person you like!
Advertisement
Home » Healing Tools A-Z » Yoga

Yoga is an umbrella term for a number of physical, mental, and spiritual practices originating in India. There are over a hundred known varieties of yoga although a unifying characteristic is that they are generally geared toward promoting self-discipline. The earliest origins of yoga date back over 5,000 years, originating in India. It is generally considered that yoga is considered one of the six prevailing schools of Hindu thought (it has since been popularized around the world, however) yet there is some dissension in this regard.

Learn to do Yoga poses correctly for FREE, see instructional video below!

How does Yoga work?

Yoga is predicated around careful application of breathing techniques, exercise, and meditation. It views the body as a malleable tool that can be shaped in order to improve one’s spiritual and physical well-being.

In the United States, yoga typically involves the individual learning new physical poses and contortions; it is not a form of aerobic activity and is generally conducted while sitting down. However, there do exist less popular forms of yoga that involve more physical motion. 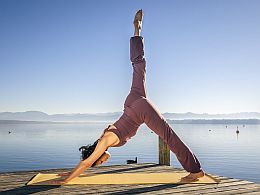 There are a number of popular varieties of yoga, including: hatha yoga (which involves often painful contortions of the body) and Bikram yoga (an offshoot of hatha yoga characterized by 90-minute sessions in which individuals perform a set of 26 physical exercises, as well as two breathing exercises.) Both Hatha and Bikram yoga can be performed in isolation, although they are most commonly conducted in classes. Because it is imperative that one’s posture and technique follow the prescribed instructions (and because there is the potential for great pain to result from improper form), it is most common for a yoga instructor to lead the class.

Even when performed in a group dynamic, it is imperative that yoga be performed in as quiet an environment as possible as it is intended to be an introspective, rather than social, exercise. While yoga often looks painful, it should never involve any pain and any physical discomfort likely designates improper technique.

What is Yoga used for?

Athletes often use yoga as a precautionary measure in order to prevent injuries. People who work in offices or do not often engage in any physical activity will also benefit from yoga as it keeps their muscles flexible and supple. It is also commonly employed in order to recover from injuries to the shoulder, neck, back, legs, and knees. Because it helps people relax, yoga is popular among individuals who suffer from high blood pressure. Although yoga provides benefits to most people who practice it, there are various conditions in which one should refrain from it, including pregnant women, those who suffer from bone diseases such as osteoporosis, or those with severe structural damage to the spine or neck.

What are the benefits of Yoga?

Yoga is typically adopted by individuals looking for a form of exercise or a meditation technique. It increases one’s flexibility and can assist one in recovering from demanding physical endeavors. In addition to its physical benefits, yoga helps one clear their mind and can assist in relieving stress.

Learn to do Yoga Poses correctly for FREE! See the instructional video on the most common Yoga Poses. There are 22 Yoga Poses included in the video: